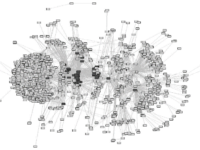 The darkweb is a part of the internet that requires specialized software to access it. Tor remains the most prominent darkweb in existence.

Qualitative analysis has previously focused on case studies in Tor such as the Silk Road which is only one small piece of the network. Websites are connected through hyperlinks which allows information to flow within Tor.

This study explores the ways that Tor nodes are using these pathways and identifies core sites (central and connecting hubs) through social network analysis.

The core websites have a significant portion of all the connections within the network and are largely composed of directory sites which link users to specific content. The core is consistent with other dark networks but indicates its limited generalizability to online networks.

Network topology may play a larger role in hyperlink formation than network typology. The core serves a critical function which has implications for detecting how users and goods/services move through this network.

The Dark Crawler 2021 . Powered by WordPress