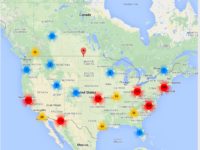 The goal of this paper was to analyze hacker forums to better understand the threats they pose to Canadian critical systems specifically and cyber-security more generally.

To facilitate the data collection, a customized web-crawler was developed to specifically capture the structured content posted to forums.

We identified and geolocated user disclosed IP addresses to try to identify critical systems and determine the extent as well as context in which critical systems were openly discussed by forum users.

In total, 311,501 analyzable IP addresses were extracted from the data with 3,168 (1%) geolocated to Canada. The prevalence of Canadian IP addresses does not indicate their potential for exploitation, although it does highlight a perceived heightened interest in Canadian critical systems by hacker forum users.

The Dark Crawler 2020 . Powered by WordPress