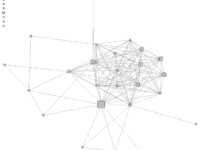 This research utilizes social network analysis to determine the success of three different disruption strategies on a child exploitation network extracted from the public internet.

Using a custom-written web-crawler called LECEN, data from a set of hyperlinked child-exploitation websites was collected from the Internet.

From these data, two types of networks were coded: the nodes of the first network consisted of only website domains, while the nodes of the second were generated using the registrant data, where the nodes represented the legal owners of those same domains.

Three attack scenarios were carried out on these two networks: two types of hub attacks (one focused on in-degree and one focused on out-degree) and a bridge attack.

Using these disruption strategies, it was found that bridge attacks were more suitable for disrupting the domain networks, while both hub-attacks could be favored when disrupting the network of registrants.

These findings have implications for law enforcement, as it provides real-world applications to disruption where registrants may be targeted directly.

The Dark Crawler 2021 . Powered by WordPress